skip to main | skip to sidebar

Dogs -- a Legend & a Pourquoi Tale from China 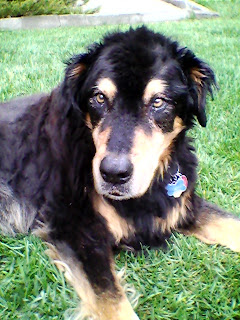 Dedication: These two stories are dedicated to my beloved older dog Amber, who left this life today, March 6, 2012.

Amber was a big dog. In her prime, she weighed over 90 pounds. We adopted her from the street as a stray when she was already full grown back in 1998.

I guess most dog owners rave about their pets, regarding their abilities, their keen intelligence, and so on. I won't be an exception. Of all the dogs I've ever owned or encountered, Amber had the sweetest disposition. Everyone who met her instantly loved her. She never asked for much in this life, just some companionship and a short walk. Too often I failed to grant either of her modest wishes. Now, of course, it's too late. I'm left just with an empty backyard, some fur here and there, her empty bowls and dishes, and a huge cavern in my heart.

I'm very grateful to God for allowing us to have Amber in our lives all these years.

One day, while he was out for a walk, he came across a stray dog as thin as kindling, obviously starving and near death. Lu Yan pitied the dog and took it home to raise it as his own.

One evening, after some heavy drinking, Lu Yan  collapsed on his bed and fell into a deep sleep. He was awoken by his dog's loud barking into his ear. The dog also strongly took hold of Lu's sleeve as if to pull its master off the bed.

Lu Yan, groggy, was forced to stagger out of bed.

As it turned out, the neighboring house had caught fire, and now the fire had spread to Lu's house. His dog had been barking and pulling his sleeve to rouse him from his sleep to save his life! Thus was Lu Yan and his loyal dog able to escape the inferno.

One day, long before dogs became our best friends in the animal kingdom, a dog was roaming up in a mountain ravine. As he looked and moved about, he began to do some thinking.

Well, I've got my limitations, this dog thought. There's no doubt about it. What I need to do is partner myself up with some other animal, and together we can each bring something to the table.

Before long, the dog spotted a rabbit darting through the ravine.

Aha, there we go, thought the dog, and he sprinted after the rabbit, finally catching up to it.

"Say there, Rabbit," said the dog, "let's be friends and partners! What do you say?"

"All right," said the rabbit.

That night, after the first day of their partnership, they both lay down to go to sleep. Suddenly, the dog heard something, and, as you know dogs are wont to do, he started barking his head off.

"Hey, hey, hey, Dog!" whispered the jittery rabbit. "Stop it, would you? You keep doing that and the wolf is sure to hear us and find where we are! Then, we'll both be in big trouble."

The dog saw how frightened the rabbit was and thought, So, he's afraid of the wolf. That's the animal I need to team up with, not a timid rabbit!

The next day, after some searching, the dog located the wolf and approached this bigger animal.

"Wolf, I have an offer for you! How about you and I become partners and friends?" asked the dog.

"Fine, Dog," replied the wolf. "Let's be friends and partners."

So the two new friends and partners spend their first day together, and when night fell, they prepared to sleep. Suddenly, the dog heard something.

"Hey, Dog!" hissed the wolf. "Stop that immediately! Are you out of your mind? Do you want the leopard to find us and eat us?"

Hmm, thought the dog, this wolf is just as afraid of the leopard as the rabbit is of the wolf. Why spend my time with Wolf? It's the leopard I need to find!

So the dog ended his alliance with the wolf and sought out the leopard. Deep in the mountains, he found the large cat.

"Leopard, greetings!" said Dog. "How about you and I become friends and partners?"

The two had just spent their first day together and were now ready to lie down for the night when suddenly Dog heard something and began barking like mad.

"Dog! Dog!" whispered Leopard. "What do you think you're doing? You want to get us both killed? Your barking is going to lead the tiger here!"

Huh, thought Dog, this leopard is as scared as they come! What a waste of time! First thing tomorrow morning, I'm going to join up with the tiger . . .

And so the next morning, the dog said goodbye to the leopard and went to see the tiger.

"Hello, Tiger!" said the dog, finally locating the tiger lurking on a hillock. "How about if we join forces? You know, become partners and pals?"

And so the dog now became the tiger's companion and ally, sharing everything alike. Then came their first night together. It was close to sleeping time when the dog, hearing a noise somewhere off in the bushes, started barking.

"Whoa, whoa, Dog! What on earth?" asked the tiger in hushed tones. "Do you realize with all that racket you're making you're going to attract the attention of the hunter?"

"The hunter," continued the tiger, "the man! He hears us and we're as good as dead!"

So, thought the dog, even the tiger fears something, the hunter! What am I doing here with the tiger? It's the man I need to be with.

That morning, the dog bid the tiger adieu and headed out to search for the hunter. Later that day, the dog descended the mountain and came upon a village. There were people everywhere! He spotted one man in particular and approached him.

"Hey, Person, " said the dog, "why don't you and I become partners and friends?"

The man than gently stroked the dog's legs and patted his back. The dog, of course, was overjoyed to receive such affection.

That night, the man showed the dog to the eaves of the veranda, where earlier he had prepared a nice bed of soft rice straw for the dog.

"Dog, here's where you can sleep! Good night."

The dog found the rice straw to be nice and warm, and there he spent a very good, comfortable night. Then, very early that morning, the dog heard something and began his customary barking. The dog's new friend came running out.

"Dog, what's going on? Are you afraid of something?" the man asked.

"Y-Yes, actually," said the dog. "I'm afraid of something but I don't know what."

The man laughed, patted the dog, and said, "Dog, as long as you have me, you have nothing to fear."

Well, that calmed the dog down and he went back to sleep. A few hours later, he awoke and again began to bark. Once again, the man came outside.

"Poor dog, you must be hungry!" said the man. "Let me show you where you can get something to eat. How does some rice with meaty ribs sound to you?"

Of course such a meal sounded very good to him, indeed!

This man is so wonderful, thought the dog. He's not afraid of anything, and he takes wonderful care of me. He's the best partner of all! I'm sticking with him!

And so from that day on, dogs and people have been partners and good friends, even though most, maybe even all dogs have never quite learned to give up their habit of barking at night!

Pourquoi stories or just-so stories purport to explain the origin of some phenomena such as why turtle shells have ridges or why dogs and cats seem to hate each other. Those that explain the origin of the heavens, earth, sun, and so on fall into the realm of myths, while those like this simpler tale are categorized as folktales.

Fred Lobb
I'm an English teacher and collector/translator of Chinese-language folktales from Southeastern China--Guangdong and Fujian--and from the island of Taiwan. In addition, I have posted stories from China's extreme Northwest and Northeast. I have translated and adapted each folktale and have attached cultural and folklore notes for each particular story. Please note these tales are definitely not PC; folktales and fairy tales are essentially never PC. I bring them to you "warts and all." NOTE: Enter into the search bar above themes (e.g., "wolves," "shapeshifter," etc.)or titles or approximate titles (e.g., "Grandauntie Tiger"). Email: Fred.chinesefolktales@gmail.com